Galway City has a particularly diverse range of natural habitats, many of which are of international and national conservation importance. These include peatlands, wetlands, woodlands, rivers, canals, semi-natural grassland and the many coastal habitats found along the city coastline including sandy, muddy and rocky shores. These wild areas, and the many city parks, private gardens and green spaces, help create a vibrant and colourful city where people and nature co-exist.

Those parts of the city where nature is allowed to flourish provide food and shelter to a wide range of wildlife. The inner part of Galway Bay and Lough Corrib are internationally renowned for their wealth of birdlife. Galway City has a relatively rich small mammal fauna for an urban area of its size, including hares, foxes and otters, which reflects the abundance wild areas that occur in the city.

Galway City’s rich natural heritage or biodiversity is a major part of its attraction and charm for the people who live, work and visit the city. It adds to the city’s distinctive identity, and has shaped the cultural heritage that Galway City is famed for.

Studies based in the Zoology Department of NUI, Galway have shown that at least twelve species of mammals occur in Terryland Forest Park including those common in urban areas, such as the fox, house mouse and those that are usually confined to rural areas, such as the Irish hare. The presence of the Irish hare in an urban setting is significant and reflects the quality and the interconnectedness of the natural areas within the city.

Other mammals that occur in the city include the otter, stoat, badger, pine marten, wood mouse, bank vole, pygmy shrew, hedgehog and at least seven species of bats (lesser horseshoe, whiskered, Daubenton’s, brown long-eared, Natterer’s, Leisler’s, and the common and soprano pipistrelle). A healthy small mammal population is essential for the maintenance of a dynamic food web.

County Galway contains several areas of international ornithological importance and parts of a couple of these areas lie within Galway City. There are, however, many other important sites and habitats for birds in and around the city. These include woodland, scrub, hedgerows, wetlands (including the canals), bridges, farmland and gardens. Important bird species such as the barn owl have been recorded within the city, outside the designated areas. 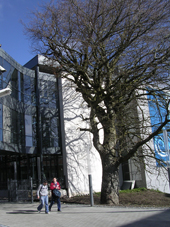