You are here: Home » Merlin Woods

Merlin Woods is a large urban woodland located on the eastern edge of Galway City. This beautiful urban woodland greatly enhances the Galway cityscape and is a haven for wildlife.

Merlin Woods is currently the largest area of woodland around Galway City and therefore is of high conservation importance. 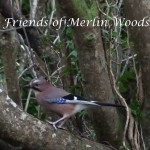 The Merlin Park Hospital and Merlin Woods occupy the former site of the Waithman estate. Merlin Park House was built by Charles Blake in the first decade of the 19th century and  was inherited by the Waithman family in 1876. It was sold to the state in 1945 so that a tuberculosis sanatorium could be established on the site. The original house no longer exists. The Waithmans planted many trees during the period when they owned the 340 acre estate. 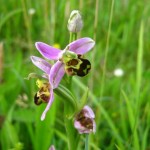 The State Forestry Department planted 146 acres of mainly Norway spruce in the North Wood in the 1960s on the grounds of the former estate, but this is not managed as a commercial crop today. There are stands of native hazel woodland to the east, west and north of the conifer blocks, with a stream running through from the Northeast. Areas of exposed limestone pavement support a range of flora typical of the Burren, including some rare species. Native whitebeam can also be found in the North Wood,  along with some old, open-grown beech and ash trees, which were most likely planted prior to 1830.

Merlin Castle is located on the south western edge of the North Wood. This landmark archaeological site was at one stage owned by the Lynch family in the 16th century. 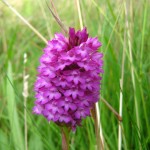 The South Wood extends from the hospital entrance gate to the  western edge of the hospital on an area of land owned by the HSE. The eastern block of the South Wood contains mainly beech, sycamore, and native ash and hazel. Elsewhere in the South Wood there are areas of young, regenerating native woodland, which coincide with patches of old woodland as seen on the 1830s Ordnance survey map. Veteran trees are a feature of the South Wood and include beech, oak and sitka spruce. 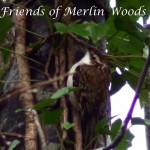 There is a network of paths running through the woods which makes it an ideal destination for a walk. There is much wildlife to be seen, such as red squirrels, foxes, rare flowers and many birds. Merlin Woods is easy to get to as it is located on a bus route frequented by the Bus Éireann 402 and 409 services. Click here to view a map.

You can download the full Merlin Park Woodland Habitat Survey and Management Plan by Dr Amanda Browne and Dr Janice Fuller from the Downloads section of this website.